Rip Under The Pines (in development)

In a regional mountain town an eccentric elderly resident in urgent need of medical attention is missing and the only clues to his whereabouts are a broken television screen, a missing vial of morphine and fronds from a strange pine tree that nobody has seen before. To solve the mystery, a group of traumatised paramedics must face their own demons to save him in time. The film explores themes of trauma, loneliness and toxic work cultures while paying tribute to frontline workers who sometimes sacrifice their own mental health to save others.

NightMayor: The Trials of Jeremy web series (in development) 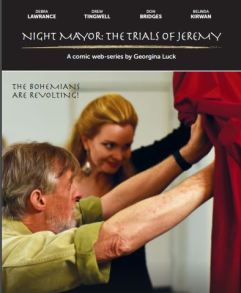 ‘NightMayor: The Trials of Jeremy’ is a new comic web-series about a muddle-headed Mayor whose bumbling mistakes nearly destroy local artworks – and the artists who fight back for their creative freedom. The series stars Alison Whyte (Frontline), Don Bridges (Troll Bridge), Drew Tingwell (Winners & Losers) and Belinda Kirwan (Hactresses). The series is Written by Georgina Luck with and Co-Directed by Georgina Luck & Kate Whitbread. It will be an OzFlix Original Production. 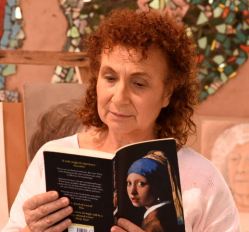 When a Kurdish poet escapes her homeland of Iran, she takes her beloved’s birthday gift – “Girl with the Pearl Earring” translated into Farsi – with her on a journey to seek political asylum. Chancing upon a community library, the invitation to ‘take a book, leave a book’ forges a poignant connection between her new landscape and the home she has left behind. ‘Broken Boat’ is Co-Written by Maryam Babaali, Co-Written/Directed by Angelo Salamanca and the /Director of Photography/Editor is Hayley Miro Browne. Please see our full ‘Broken Boat’ Cast Crew & Supporter list. We are also very grateful for the support of our generous project partners. ‘Broken Boat’ premiered at ‘YoFiFest’, the 2020 Yonkers New York International Film Festival.

In the mystical Blue Mountains, a paramedic faces his most confronting case – will he follow rules to prolong a patient’s horrific suffering or risk his career by ending the patient’s pain? The film stars actors from some of Australia’s most iconic films and TV shows – Anne-Louise Lambert (‘Picnic at Hanging Rock’), Chris Gabardi (‘The Secret Life of Us’), Beth Champion (‘Brides of Christ’), Tiriel Mora (‘The Castle’), Keiran King (‘Dr Blake Mysteries’), Don Bridges (‘Romper Stomper’), Joanne Samuel (‘Mad Max’) and introducing Andie Isalie. ‘The Last Babushka Doll’ is written/produced by Georgina Luck and directed by Angelo Salamanca. The film screened in Official Selection at the St Kilda, Byron Bay (Best Short Film nominee), San Jose and Yonkers New York International Film Festivals as well as the Lorne and Setting Sun Film Festivals. 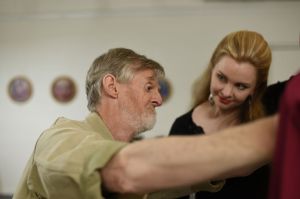 Council has commissioned a beautiful new sculpture of the fertility goddess Cybele heralding Spring, but there’s a problem – everyone thinks the sculpture looks like the Mayor in a highly compromising position. The Sculptor is being pressured to change her artwork, until the Hallkeeper comes up with a controversial solution…
Written and directed by Georgina Luck, Jeremy’s Cybele Makeover short film stars actors from some of Australia’s most iconic films and TV dramas – Debra Lawrance (Please Like Me), Don Bridges (Romper Stomper), Drew Tingwell (Winners & Losers) and Belinda Kirwan (Hactresses).